The Gatwick drone files: Capturing video of a drone is far from impossible

At a parliamentary defence committee (29/10/2019) on the topic of the Domestic Threat of Drones, the chair (Dr Julian Lewis MP) quizzed Giles York the then Sussex police chief constable about the lack of any photos or videos of the Gatwick drone.

One of the most curious parts about it was that there was no filmed imaging at all of the drone, even though so many people thought they’d seen it. Isn’t that rather strange that no CCTV system… nobody with a mobile phone camera managed to pick up this device when it was causing such disruption?

Unfortunately for Dr Lewis he did not get a comprehensive answer to his question, he was given the impression that no one at Gatwick was equipped with anything better than a camera phone.  The idea that a drone is impossible to track and video is nonsense, in fact the UK has some of its Royal Air Force bases protected by Leonardo’s Falcon Shield, which is a system to do just that, that same system was at Gatwick in 2018 from day 2 of the claimed drone incursion.  The Department for Transport and Sussex Police continue to redact this information despite it being in the public domain.

One of the assumptions which is a misconception is that with the alleged drone only being seen at night (based off Sussex Police’s own Operation Trebor timeline) it must have been difficult to capture on video.  However, drones have a good thermal signature due to heat from the motors and battery, as a consequence they stand out like a sore thumb on thermal cameras.  This means the thermal cameras on the police NPAS (National Police Air Service) helicopters would have been able to see and film any drone and so would Falcon Shield.

For the sake of considering the thermal signature of a drone, we’ll put aside consideration of the fact the drone must have been lit up like a Christmas tree for definitive visual sightings to have taken place at night and the fact that the world’s media were present with skilled camera operators with high ISO camera bodies and telephoto lenses capable of capturing video at night

According to the specifications Falcon Shield’s Electro-Optical unit NERIO-ULR when operated manually can identify an object 2m x 0.5m at over 10km, in Leonardo’s marketing it is shown as capable of automatically tracking and capturing HD video of a consumer drone at 1 km which is further away than Giles York suggested the rogue drone was in his evidence.


We should not forget that Falcon Shield also has radar tracking and that Metis Skyperion with its RF tracking was also deployed, so there were no rogue drones detected visually, on specialised radar or on RF. 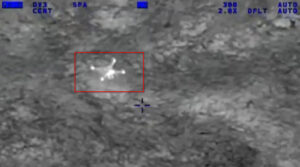 There have been cases going back years of helicopters readily tracking drones with conventional zoom cameras and thermal, here we see an actual NPAS helicopter with a thermal camera tracking a consumer drone, the heat from the motors and the battery showing up as a bright white.

NPAS welcome the first successful prosecution in the UK for conflict between one of our helicopters & a drone. The pilot had to take evasive action whilst crew were searching for a vulnerable missing person https://t.co/zDT6MXRS50 @UK_CAA #NPAS999 #police ^RC pic.twitter.com/CGAedU7CK6