DJI has recently registered the trademark for a new product called Demorpheus, the description for which suggests it is a new flight controller or add-on sensor unit, possibly a consumer version of Manifold which is an embedded Linux computer used with DJI’s Matrice 100.  As seen in DJI’s Matrice and also 3DR’s Solo, companion computing seems to be the future with tasks such as advanced navigation and image recognition offloaded to companion CPUs running flavours of Linux so a consumer […] 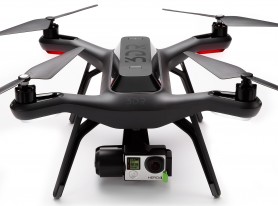 This week everyone was focussed on DJI’s new announcement, expected to be the Phantom 3, but this evening 3D Robotics stole some of the thunder of publicity with a teaser trailer of their new quadcopter, which they didn’t name.  However, in a cheeky marketing move they had the name of drone appear for a single frame in the video, it was spotted surprisingly quickly and posted on Facebook.  The Twitter account @DIYDroneSafety noted the SOLO trademark had been registered for a while […]